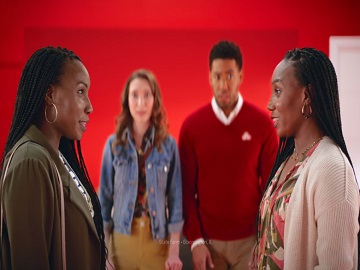 The spot features Jake and a friend being joined by a young lady, who comes accompanied by a friend. It turns out that the latter and Jake’s friend are twins. The two women start talking at the same time and realize they have the same birthday. “Twins? That’s an unexpected plot twist.

At the end of the commercial the tagline “Like a good neighbor, State Farm is there” flashes across the screen.
Kevin Mimms, who plays Jake, has starred in numerous ads for the insurance provider. In one of them, which also features actor Matthew Bellows as a tech genius who upgraded a car, he impresses a spy by telling her that with the Drive Safe & Save app from State Farm she will save up to 30% for being a safe driver and get a discount for signing up.

In another recent commercial, Jake from State Farm saw Chris Paul and his kids welcome an unexpected guest: Cliff Paul (Chris’s fictitious separated-at-birth twin brother). State Farm is known for having Chris and Cliff Paul in several ads over the years.