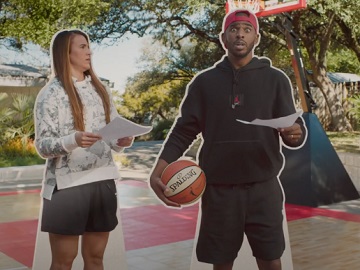 The spot features the two basketball players training on a court until Jake shows up. “Is this one of your State Farm commercials?” Sabrina asks Chris. Jake confirms and soon realizes that the Sabrina and Chris haven’t received all the scripts. He then hands them over the scripts, which Chris reads. “Chris smiles and says “Wow, I love State Farm’s surprisingly great rates then suddenly Chris and Sabrina turn into life-size, cardboard cutouts”.

The commercial ends like that, with Sabrina and Chris turning into life-size cardboard cutouts. Sabrina even falls.

Kevin Mimms, who plays Jake, has starred in numerous ads for the insurance provider. In one of them, which also features actor Matthew Bellows as a tech genius who upgraded a car, he impresses a spy by telling her that with the Drive Safe & Save app from State Farm she will save up to 30% for being a safe driver and get a discount for signing up.

State Farm, the title sponsor of the NBA Play-In – the first-of-its-kind tournament featuring six games aired on ESPN and TNT, has also teamed up with UnitedMasters artists Grace Weber and Juslo to create surprisingly great videos which will recap the NBA Play-In Tournament games and will be available on the NBA’s TikTok and Instagram reels.

Moreover, the insurance company and the NBA are donating, this season, for every assist made during a regular-season game, $5 to enhance STEAM learning and technology in classrooms and afterschool programs across the country.