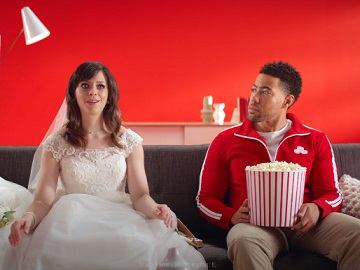 The spot sees a runaway bride approaching Jake from State Farm, who’s sitting on the sofa having some popcorn. She tells him she couldn’t go through it and that she wants to hide in there a bit. She also reveals, while looking Jake in the eyes, that she’s in love with someone else, which makes him get scared. He soon can breath relieved because it turns out the lucky one is the groom’s brother, not him.

“That was an unexpected plot twist. Well, you can expect though – State Farm being there when you need us, no matter what comes up. It’s called service,” Jake says, adding the tagline “Like a good neighbor, State Farm is there”.

Kevin Mimms, who plays Jake, has starred in numerous ads for the insurance provider. In a recent ad, he appeared alongside Chris Paul and WNBA star Sabrina Ionescu, who turn into life-size cardboard cutouts.