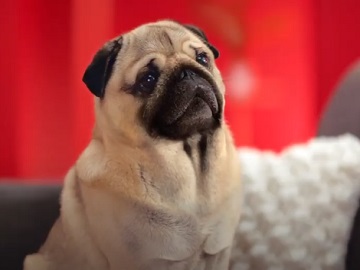 “No matter what surprises life has in store, expect State Farm to be there. It’s called service,” this is the idea behind the latest State Farm commercial.

The spot features Jake from State Farm sitting on a sofa and telling his pug, who’s right next to him, that he’s intended to watch five more episodes before he went to sleep. “So a typical Tuesday, Jake from State Farm?” the dog asks him. The State Farm agent is shocked to hear the pet talking and then turns around to the camera, to deliver a message from the insurance company: “You might not expect a talking dog, but you can expect State Farm to be there no matter what happens next. It’s called service”.

He then tells again to his furry friend that he can’t believe he can talk and they high five, before the tagline “Like a good neighbor, State Farm is there” flashes across the screen.

Kevin Mimms, who plays Jake, has starred in numerous ads for the insurance provider. In one of them, which also features actor Matthew Bellows as a tech genius who upgraded a car, he impresses a spy by telling her that with the Drive Safe & Save app from State Farm she will save up to 30% for being a safe driver and get a discount for signing up.