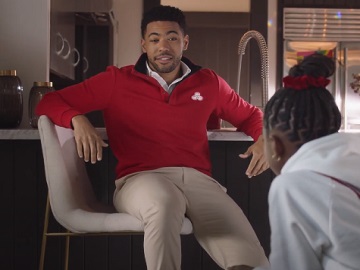 The spot features the NBA All Star looking through the window, together with his two kids, who ask him what’s going on. Paul tells them they are in a State Farm commercial and anything can happen. He also shares some words of wisdom by adding that “it’s ok to be afraid but sometimes in life you have to face those fears.” At this point, his daughter notices Jake from State Farm in the room. He assures them that things are going to go surprisingly great like State Farm’s surprisingly great rates and soon after that welcomes an unexpected guest: Cliff Paul. (For those who don’t know, Cliff Paul, known for his crisp outfits, caterpillar mustache and thick glasses, is Chris’s fictitious separated-at-birth twin brother – who grew up to become a State Farm agent).

The commercial ends with Jake saying the tagline “Like a good neighbour, State Farm is there”.

Chris and Cliff Paul co-starred in several other ads for State Farm over the years. In 2017, they appeared in “Going Away Party” commercial, that debuted during the Houston Rockets-Cleveland Cavaliers game on TNT.