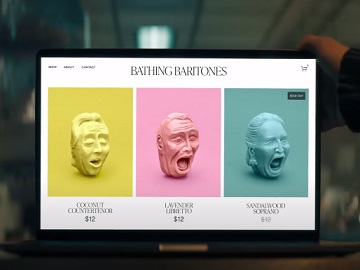 Squarespace has released a new ad urging people who got an idea for a new business to “Squarespace it”.

The spot features a man in a bar who shows to a friend the three opera-themed soaps he created and tells him he’s planning to sell them online. The lady pouring coffee in his cup encourages him to Squarespace that, but he doesn’t seem to understand the meaning of this expression. When several other persons in the diner tell him to do the same thing, his friend can’t help asking if this is like a website or something, which leads to the creative finding out about Squarespace, which he eventually uses to sell his line of bathing baritones, including the Coconut Countertenor, the Lavender Libretto and the Sandalwood Soprano, all priced at $12 each.

“Got an idea? Squarespace it!” the voiceover says at the end of the commercial, which also encourages viewers to start their free website trial.

Squarespace, which lets customers claim a domain, build a website, sell online, and market a brand, has collaborated with several celebrities over the years to promote its services. Among them are Winona Ryder, Idris Elba and Dolly Parton, who recorded an original track for its Big Game 2021 commercial, set to the tune of her classic hit “9 to 5”, to serve as an anthem to the side-hustle.