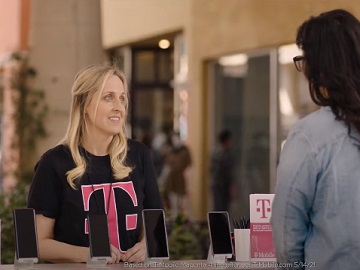 Spectrum urges people to choose Spectrum Mobile in one of its latest commercials.

The spot, dubbed “Ring, Ring,” features a woman going to a T-Mobile stand and telling the sales representative that she wanted to get the mobile deal she saw on the sign. “Sure, if you’re getting four lines,” comes the answer. When the potential customer says she doesn’t need four lines, the T-Mobile representative informs her she can’t get that deal and tries to convince her to get four lines by asking her to imagine what she could do with them. According to the sales rep, the customer could use one line to call her lawyer and another one to call her boss, but she doesn’t manage to convince her.

Eventually, the woman decides she’s good and leaves. “T-Mobile is selling it. Don’t buy it,” the voiceover says at the end of the commercial, adding “For one fair price, no matter how many lines you need, choose Spectrum Mobile!”.