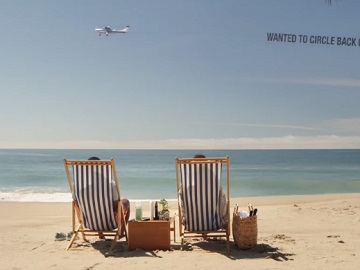 Snickers promotes its Peanut Brownie Ice Cream in a new commercial, highlighting that this sweet treat will help you chill.

The spot features a couple on the beach, with the woman saying that she needed a break. When a plane in the sky carries a message for her, reading “Hi, Julia, I hope this email finds you well,” her partner tells her to ignore it. She tries to, but she keeps seeing it. “So relaxing,” he says, when this is obviously not true.

“Can’t chill? Maybe you just need a Snickers Ice Cream,’ the voiceover says at the end of the commercial, which showcases the brand’s latest ice cream innovation, SNICKERS Peanut Brownie Ice Cream, which is a mashup of three beloved treats: SNICKERS, brownies and ice cream.

The Mars-owned brand unveiled its ice cream earlier this year, in January, and launched it in stores in March.

The new SNICKERS Peanut Brownie Ice Cream bar features brownie-flavored ice cream with chewy brownie bits, topped with a thin layer of caramel and peanuts and covered in a milk chocolate-y coating. It is available in mass, grocery and convenience stores in Singles (2.0 ounces) and Multipack boxes (12 ounces).