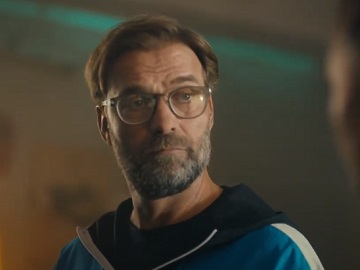 Snickers continues its “You’re Not You When You’re Hungry” campaign with a hilarious new advert featuring Liverpool manager Jurgen Klopp.

Created by BBDO Düsseldorf, the spot features Klopp playing a game of table football with three teenagers and being very vocal about what happens. “3-5-2? Nobody plays that way any more!” he shouts at the table. It soon turns out that the fourth player was actually a teenage girl named Alex, who was hungry and wasn’t herself.

The ad, which was actually filmed in 2019, when Liverpool were riding high in the Premier League and had just won the Champions League, launched earlier this year, after the club endured worst home league run in 98 years.

Klopp joined thus the likes of Mr Bean and Elton John, who starred in similar adverts for the brand.