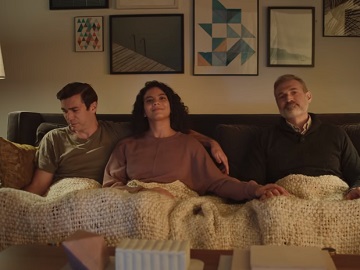 One of the spots tackles the open relationships and features a young man who thought, when his girlfriend told him to keep their relationship loose and open, that “this was just something people said”. Then he met Glenn, an older man who it turns out is right there, on the sofa, next to them.

“Life’s full of hidden problems. So we hid a comforting brownie in a Snickers,” the voiceover says at the end of the commercial.

Other ads feature a woman who uses a colleague’s nickname during a meeting, without knowing that all her other colleagues use behind his back, and a man who asks his girlfriend, visibly upset, what’s wrong and she says nothing’s wrong.