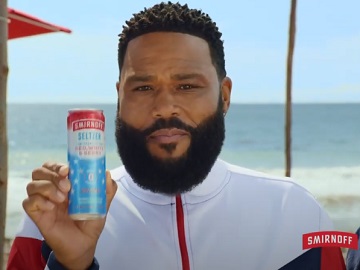 The spot features actor, comedian, and game show host Anthony Anderson on a beach, saying that America it’s always been the dream to get a job where you can rock a real ball suit – a track suit. Now that’s flavor, just like Smirnoff Red, White & Berry Seltzer,” he says, suggesting they should crack one of the cans open.

At the end of the commercial he adds the tagline “Flavor on 100. Sugar on Zero”.

The brand unveiled the zero-sugar hard seltzer version of its Smirnoff Red, White and Berry vodka in April 2020 and tapped brand collaborator Laverne Cox and new brand partners Dave Bautista, Diane Guerrero and Megan Rapinoe to star in a dedicated campaign, titled “Hang Out from Home for America”.

Containing 90 calories, the hard seltzer is described as a combination of cherry, citrus and blue raspberry flavours and is available for purchase in select markets.

Smirnoff is also launching NEW Smirnoff Ice SMASH Red, White & Berry – a premium malt beverage that delivers the same delicious flavor combination of cherry, citrus and blue raspberry in an easy to grab and go format (available nationwide for a limited time at a suggested retail price of $1.49 per 16 oz can) and a new summer-long promotion, called “Smirnoff Summer of 2,021 Dreams”, which will give away 2,021 of the best summers ever with epic trips and dream experiences. Beginning April 2 through August 15, 2021 anyone 21+ across the continental states in the U.S. can go to the brand’s website and share how they want to live their best life this summer for a chance to win one of 2,021 prizes, which include a custom Smirnoff Red, White & Berry home bar, coolers, mini fridges, as well as many outdoor activities and experiences.