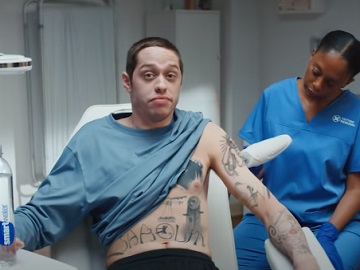 The spot features comedian, SNL star, writer and producer Pete Davidson in a tattoo removal studio saying he has made a lot of questionable choices, while the technician zaps away at his arm. He mentions some of them, including living in his mom’s basement until his late twenties, modelling, and hoverboarding rather than walking through a fancy restaurant, while he was at a date. He says he’s trying to make smarter choices and this is why he chose “hydrating with smartwater and stuff like that”.

The commercial ends with the tagline “keep living smart” flashing across the screen.

Smartwater’s new campaign debuted on July 5th with two IRL activations to help Americans rehydrate after a weekend of celebrating. The brand honored this day, which is “Rehydration Day”, with pop-up events at Santa Monica Pier in Los Angeles and Jones Beach in Long Island, New York, and made available to the public a series of items such as Smartwater-filled kegs and christened “smartkegs”.