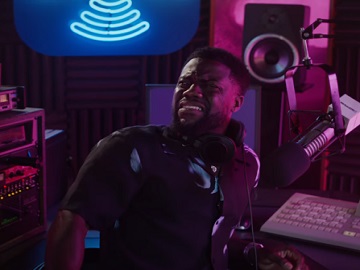 SiriusXM has launched a star-studded multi-channel campaign to advertise its SiriusSiriusXMXM App. Titled “The Home of SiriusXM,” the campaign stars Kevin Hart and several other artists, creators, and stars from the worlds of entertainment, music, and sports, all living as roommates in the enormous SiriusXM house.

One of the commercials opens with David Grohl making his famous lasagna and asking Kevin Hart, who is in a recording studio, if he wants some. He shouts to make himself heard, but the comedian doesn’t understand a word of what he’s saying. Kehlani tries to help Grohl and she’s also asking Hart if he wants some lasagna, but the latter keeps asking “What?” in return. Retired NFL player Brett Favre also makes an appearance. He is in the bathtub and, hearing Grohl saying something from downstairs, asks “What?”.

The spot ends with the onscreen line “Everything you want to hear lives here”.

“‘The Home of SiriusXM’ campaign lets us shine a light on many of the talented people in our diverse roster of stars and personalities who create exclusive programming for SiriusXM and interact with each other in a way not found on other audio competitors,” said in a press release Denise Karkos, Chief Marketing Officer of SiriusXM, mentioning that “The campaign is built for the long run, and you will see more executions of it in the future with surprising pairings and appearances by our talent.”