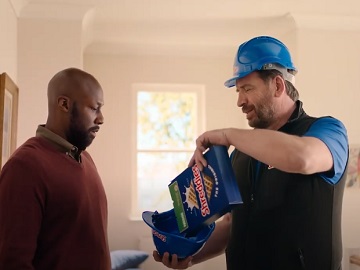 Nestlé Cereals has launched a new ad campaign Shreddies and urges families to be “Shreddie for Anything”. The brand has enlisted DYI SOS presenter Nick “get it done” Knowles to help a father wake up with teenage son.

The spot, created by McCann London, features Knowles showing up in the man’s house from a laundry basket and telling him that, when things get though, they shouldn’t eat soft. He then grabs a pack of Shreddies, which he pours into a builder’s hat, not before showing, though, how he puts up a shelf just by looking at it.

Eventually, the teenage boy is waken up immediately and sent directly to the kitchen table, where he enjoys a bowl of Shreddies in the company of his younger sister.

The campaign also marks a new packaging for the cereal, a simple and modern one.

“We know that our Shreddies customer’s is made up of busy and multitasking parents who often have chaotic mornings, and need a breakfast that does what it says on the box. Our new campaign is all about celebrating these everyday families, showing them how Shreddies delivers a satisfying, straight-up and no-nonsense breakfast for the whole family,” Toby Baker Regional Marketing Director UKA – Nestlé Cereals, said in a press statement. He also said of Knowles that he “truly embodies the ‘no nonsense’ attitude needed to help families get ‘Shreddie for Anything’ in the morning”.