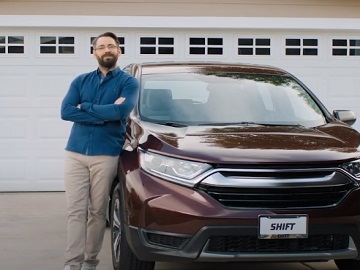 Shift has enlisted actor and comedian Martin Starr to front its new “Straight Shooter” campaign, which debuted in October 2020.

The spot features Starr standing in front of a house, near a car, declaring that a brand new car loses 50% of its value in the first three years. However, a used car from Shift, like the one parked near him, doesn’t. “Second-grade level arithmetic, still valuable,” he adds.

At the end of the commercial, the voiceover says the company’s tagline, “Used cars never felt so new”.

Starr, named an official Shift spokesperson, has starred in several ads for the online used car marketplace, part of its “Straight Shooter” campaign, which reinforces the company’s mission to make buying a used car simple, fair, and accessible for everyone.

“We aren’t afraid to say that used cars are a savvy decision – one that everyone should feel good about, and have access to. We wanted to call it like we see it and align with our savvy consumer. The logical arguments in favor of used cars are so obvious; partnering with Martin Starr’s straightforward brand of humor was a perfect way to dispel the myth that buying a new car is better. There is a door number three, and that’s Shift,” said Tracy Lessin, Vice President of Marketing at Shift.