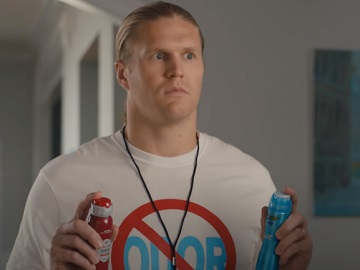 P&G has enlisted Clay Matthews to star as Odor Coach in the latest installment of its “All Strength No Sweat” campaign.

The spot features a woman who brought over Matthews to help her and her life partner, who forgets to put on deodorant in the morning when he’s staying at home. The guy is delighted to see the football superstar in his apartment but Matthews doesn’t hesitate to point out that he is “the former football superstar” because he got laid off. Equipped with a Secret deodorant in one hand and an Old Spice deodorant in the other, he assures the woman he can tackle the odor and does that by spraying some Old Spice under her boyfriend’s arm when he tries to hug her.

The commercial ends with the voiceover saying the tagline “Tackle your odor” and with Matthews alone in the couple’s apartment, sitting on the sofa and using the two deodorants by spraying Secret under one armpit and Old Spice under the other.

This is not the first time Clay Matthews promotes Old Spice. In 2015, an NFL-themed ad for the P&G-owned brand featured an animated version of the football player, who was a linebacker for Green Bay Packers at that time, playing a harp while having his hair caressed by the Indianapolis Colt.