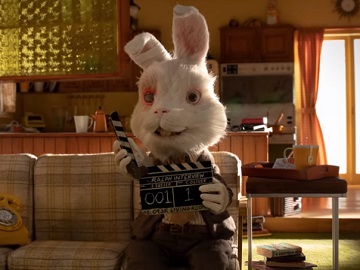 Humane Society of the United States has released a powerful stop-motion animation short film as part of its “Save Ralph” global campaign, which tackles the cruelty of animal testing in an original and unexpected way, in an attempt to ban animal testing for cosmetics.

The film introduces Ralph, a rabbit who is being interviewed for a documentary as he goes through his daily routine as a “tester” in a lab. Ralph reveals that he doesn’t see with his right eye, he doesn’t hear nothing but ringing with his right ear, he had his fur shaved and got chemical burns up and down his back, which hurts a lot every time he moves. “But at the end of the day, I mean, it’s okay, we do it for the humans, right?” he asks as he finishes brushing his teeth. During breakfast he reveals that his entire family were testers and they all died doing their job, and acknowledges that he will, too. Later on, after a cruel episode that leaves him in terrible pain, he says to everyone out there still buying animal-tested cosmetics like eyeliner, shampoo, sunscreen, “pretty much everything in your bathroom,” that without them and countries that allow animal testing he’d be out of a job, he would be on a field, like a normal rabbit.

“No animal should suffer and die in the name of beauty. Help Humane Society International ban cosmetic testing on animals globally” onscreen lines read at the end of the 4-minute film.

The “Save Ralph” campaign shines a light on the plight of countless rabbits and other animals in laboratories around the world and aims to ban animal testing for cosmetics.