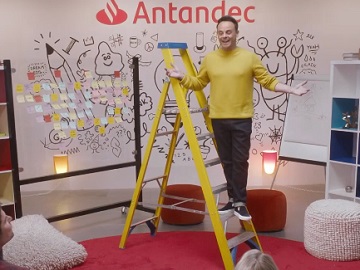 Santander continues its Bank of Antandec campaign with a new installment.

This time, Ant and Dec come up with the idea of an ingenious brick subscription service that promises to get you on the property ladder in just a few months. the two present Antandec’s brick subscription service, which implies sending first time buyers one brick in the post every day, for just %9.99/month. “Couple of months and you’re on the ladder. The property ladder. You’d have a shed in a week,” they say in the 30-second ad, which ends with the voiceover declaring that, “Meanwhile, Santander’s 5% deposit mortgages are actually helping first time buyers get on the property ladder” and urging viewers to “see what’s possible at Santander”.

The campaign, developed by ENGINE and directed by Declan Lowney at Another Film Company, debuted in 2019, with an advert which revealed that Ant and Dec’s dream has always been to launch their own bank, which is quite similar to Santander.

In another ad, newest banking enthusiasts, Ant and Dec, have shown the nation countless radical ideas they’ve had for the Bank of Antandec – from money saving ‘Mini Mochas’ to an ingenious brick subscription service that promises to get you on the property ladder in just a few months.

Billy Faithfull, chief creative officer at ENGINE, commented: “As Britain’s newest genuine-real-fake-bank, the Bank of Antandec really do care about how they’re solving their customers’ needs. It’s a pleasure to work with people so dedicated about the complex world of banking. Can’t wait to see what they come up with next”.