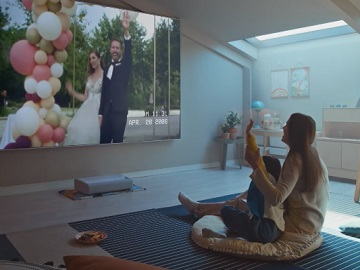 Samsung promotes its Premiere 4K Smart Laser Projector in a new commercial, urging people to launch their own private cinema with Premiere.

The spot shows a diverse cast of people, including families and friends, gathering in front of their Premiere 4K Smart Laser Projector for a movie night, while onscreen lines highlight some of the projector’s features. Thus, viewers are informed that the device boasts ultra short throw, triple laser with 4K resolution, big screen up to 130″, and powerful 4.2Ch 40W.

“Launch your private cinema in 4K triple laser” an onscreen line reads at the end of the commercial, is scored by Homegrown’s song “The Best Thing”.