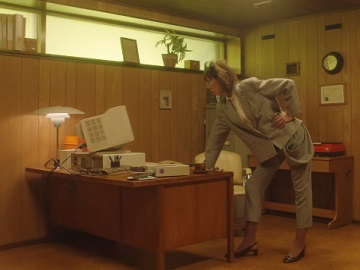 Samsung advertises its new Portable SSD T5 in a series of new commercials, developed on the idea that retro isn’t always cool.

One of the spots, set in an office in the ’80s, features Nancy, a worker who makes a file transfer and then grabs an external “high capacity” HDD, puts it in her pocket, which is huge, and takes it to her colleague Hank, who “takes care of everything” and is obviously overwhelmed by files.

“Still not upgraded to SSD? Maybe you appreciate how pocket-sized your HDD is, just like Nancy here,” the voiceover says. Hower, her pocket is, as mentioned above, huge, having the dimension of a large bag.

At the end of the commercial, the new range of Portable SSD T5, which comes in Red, Blue, Black and Gold, is showcased.

The Portable SSD T5 features a compact, solid and secure design (it is smaller than the average business card, weighing just 1.80oz, and only 0.41″ thick) and ensures ultra fast data transfer speeds. The available variants include different storage capacities – 250GB, 500GB, 1TB and 2TB. According to the brand, with Samsung V-NAND flash memory and a USB 3.1 Gen 2 interface, the T5 provides transfer speeds of up to 540 MB/s, which is up to 4.9x faster than external HDDs. Transfers and backups of large-sized data including 4K videos and high-resolution photos will be much quicker and faster.