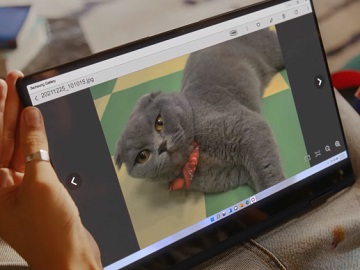 Samsung continues its “Holidays open up with Galaxy” campaign with a new installment.

The spot, titled “Purrfect Holiday Pet Portraits,” touts the Galaxy Z Fold3 5G, used by a young man to snap photos of his cat, and the Galaxy Book Pro 360, used by his girlfriend to edit the photos.

“Holidays open up with Galaxy” an onscreen line reads at the end of the commercial.

Samsung has enhanced Portrait Mode, this time specifically for cats and dogs. Once the photo is processed, users can pick which portrait filter they want to use, how strong that filter should be applied, and refocus the image. All of the modes currently available for human subjects are available here as well.

The South Korean brand has also enlisted several celebrities to promote the Galaxy Z Fold3. Among them are brand ambassadors BTS, Todrick Hall, and Future. The rapper stars in several ads, promoting also other Galaxy devices, and says the tagline “Gifts with clout speak for themselves”.