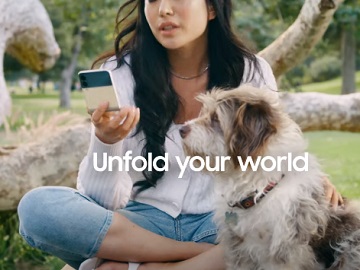 Samsung promotes its new Samsung Galaxy Z Flip3 5G in a new commercial that focuses on the water-resistant build of the foldable smartphone, which can withstand up to 1.5 meters for 30 minutes.

The spot features a young woman having a video call with a friend to show him her new furry friend – a dog. The pet accidentally spills the glass of water placed on the table, near her Galaxy Z Flip3 5G, which makes the guy believe it will break, but she doesn’t worry about it at all because she knows the device is water resistant.

“Relax, it’s water resistant” an onscreen line reads at the end of the commercial, which also sees the tagline “Unfold Your World” flashing across the screen.

The South korean tech giant has also promoted its Galaxy Z Flip3 in a commercial starring longtime brand ambassadors BTS, set to the tune of their hit single “butter”, and in a commercial featuring singer and social media star Todrick Hall, in which he performs a reworked version of his brekthrough single “Nails, Hair, Hips, Heels,” whose lyrics include “Flip, Fold, Snap, Clack” – a tongue-in-cheek take on the foldble phone’s ability to flip up and fold down.

The full-sized smartphone can fold down to just 4.2 inches and when it is unfolded has a 6.7-inch screen, perfect for streaming, gaming and texting, and has an array of sleek hues that’ll have all eyes on you, including Cream, Phantom Black, Green and Lavender.