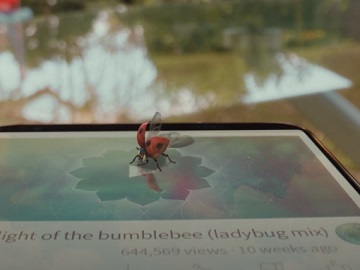 Samsung showcases the camera capabilities of its Galaxy S21 5G in a new commercial, titled “Flight of the Ladybug”.

The spot features a father using a hose to water the plants in his backyard when a ladybug sneaks under his shirt and makes him lose control of what he was doing. Those witnessing the episode immediately grab their Samsung Galaxy S21 to film it, in hopes that they would capture a video to conquer the internet. While a young man uses the smartphone in Vlogger Mode, a neighbor uses it in Director View and a teenage girl in Single Take.

“Made for the epis in everyday” an onscreen line reads at the end of the commercial.

In previous ads, the South Korean tech giant has showcased other phone features, such as the 8K video, which is
beyond cinema quality, the possibility to pull portrait quality photos straight from video, videos photos crops and
filter all in a single take, plenty of space, and long-lasting battery.

The song playing in the commercial is a remix of “Flight of the Bumblebee”, an orchestral interlude written by Nikolai Rimsky-Korsakov for his opera “The Tale of Tsar Saltan”.

ICT
Previous: I Am Beautiful Facebook Group Commercial Song
Next: The General Shaquille O’Neal & Craig Robinson in the Woods Commercial