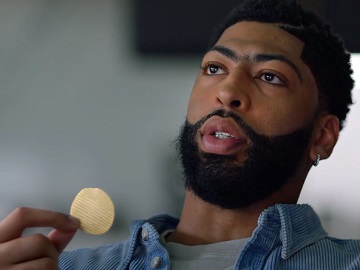 Anthony Davis and King Bach ponder the question of what Ruffles would be like without Ridges in the latest Ruffles commercial.

The spot, which marks Frito-Lay brand’s first campaign in nearly a decade, features the NBA star and the TikToker asking themselves what would Ruffles potato chips be like without ridges and taking a little trip (in their imagination) to visit some people without “their Ridges”. Thus, they imagine rapper T-Pain performing without AutoTune and a hoops coach who couldn’t care less about winning.

Developed by creative studio Motive, the commercial aims to “to inspire our fans to own all the things about them that ‘zig’ when everyone else ‘zags,'” according to Stacy Taffet, vp of marketing at Frito-Lay North America, a unit of PepsiCo. “We want to offer a platform for our fans to find power in their uniqueness. Because nothing is more magnetic than showing up as authentically you,” she also said in a press statement.

The ad, which is set to air March 5-7 during TNT’s NBA All-Star Weekend coverage, will be followed by second commercial, starring Davis. That one will debut on CBS’s March 14 Grammy Awards telecast.

The brand, which will launch Flamin’ Hot BBQ chips, in partnership with Boston Celtic Jayson Tatum, has announced that it will also introduce a “Ridge Awards” promotion, using Instagram AR filters to help users celebrate folks who “embrace their unique, quirky and distinctive ‘ridges'”.