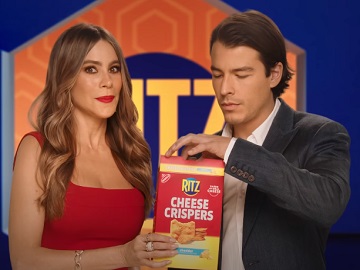 RITZ Crackers has released a new ad for its Cheese Crispers, highlighting that even Sofia Vergara can’t keep her hands off them.

The spot features a diverse cast of people eatings RITZ Cheese Crispers on the couch, while the voiceover declares that RITZ Cheese Crispers are so bold and cheesy, and crispy. At some point, Sofia Vergara shows up, saying she needs a bite. She has a RITZ Cheese Crisp and gives one to her 28-year-old son, Manolo Gonzalez Vergara, too. But one is enough, apparently, as she decides to keep the box for herself afterwards.

At the end of October 2020, she posted a photo on her Instagram account in which she’s wearing the same plunging red dress and is leaning over a box of Ritz Cheese Crispies, giving viewers a glimpse at her cleavage, but without revealing the context.