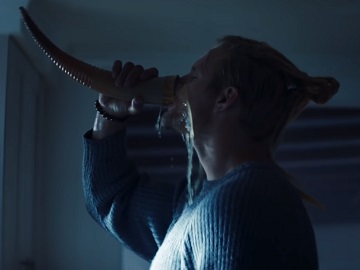 Canadian actor and singer Alexander Ludwig stars in a new commercial for the massive mobile real-time strategy game Rise of Kingdoms, to let players know that the Vikings are finally playable in the app’s ever-expanding virtual world.

Created by Battery, the spot features Ludwig being approached by a nosy neighbor who notices several similarities between him and Bjorn Ironside. “Aren’t you that Viking guy?” he asks curiously. When Ludwig says he isn’t, the neighbor can’t help mention the things the two have in common. “But you’re rowing and chopping wood with a bearded axe, and drinking from a horn, and attacking a village, and taking their resources,” he tells Ludwig’s character, who finally gives in and threatens to send his neighbor to the gods.

“Rise of Kingdoms. Get ready for the Vikings,” the voiceover says at the end of the commercial.

An official statement from the game confirmed that players can now choose which storied leader guides them into battle between the Viking Kings Björn Ironside and Ragnar Lodbrok.