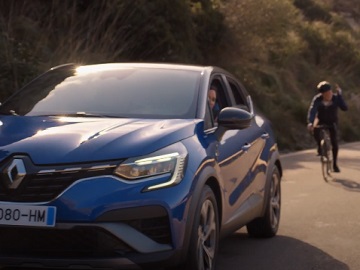 “We are constantly striving towards an electrified future with the energy to always go further,” this is the automaker’s message for viewers in the ad, which features a woman who surprises her father, a former cycling champion, and takes three of his old friends on a ride with her CAPTUR Hybrid to follow him along a road as he rides the bike again. Rediscovering the joy he feels while cycling, he doesn’t want to stop before logging dozens of miles, not even when his daughter tells him she ran out of gas.

At the end of the spot, the voiceover says that the new Renault CAPTUR Hybrid ensures up to 40% savings on gas thanks to E-TECH hybrid technology.

Serving as soundtrack is Jenn Grant’s version of “Eye of the Tiger” (first released by Survivor in 1982).

The new Renault CAPTUR Hybrid combines a 1.6L petrol engine with a 9.8 kWh battery and two electric motors, and delivers 160 hp, 188.3 mpg (WLTP) and up to 30 miles EV only range, allowing day-to-day full-electric driving. It is available for purchase starting from £30,995.