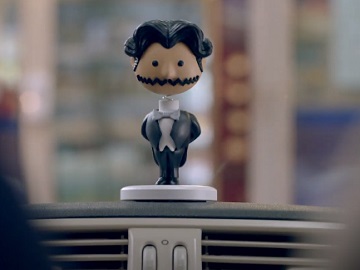 Wynne Evans, the Welsh tenor who plays Gio Compario, GoCompare’s longtime mascot, is back to the small screen in a new ad campaign for the comparison website. This time, he encourages consumers to not settle for their renewal price and ReCompare with GoCompare to see how much more they can save.

The spot opens with Evans at a gas station saying that, unlike most costs, you may find your car insurance premium is lower than last year. He then declares that there are more savings out there if you shop around and there’s the free £250 Excess Cover each time you switch with GoCompare. At this point, a lady that appears to be Gio Compario’s mother starts singing “ReCompare, it’s time to ReCompare with GoCompare”.

The advert ends with Evans urging viewers to tell their friends and family about this.

Wynne Evans has been playing GoCompare’s mascot, Gio Compario, since 2009, becoming thus one of the longest-running characters in British advertising. In 2015, after a 18-month break, he returned as Gio Compario in a new major national advertising campaign, even though the same year he had been ranked “the most annoying UK ad mascot ever”.

In 2020, Compario was featured in several ads that re-enacted car accidents that led to real insurance claims. One of them showed him having a car accident in his attempt to avoid hitting a deer standing in the middle of the road and another one showed him as Margaret Mahoney, a woman who hit a tree fallen on the road because she didn’t have enough time to brake and had her car damaged.