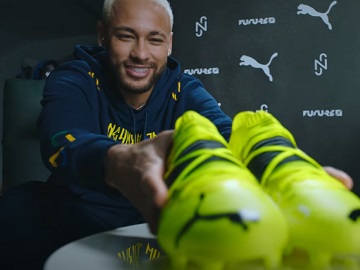 The spot features the football player wearing this football boot in various places, including the field, and leaving fans in shock thanks to his skills. A young woman who’s playing football with some guys manages to get the same reaction from her “opponents” on the field, several guys who can’t take the football from her.

“Drive them Crazy” an onscreen line reads at the end of the commercial.

According to the brand, the FUTURE Z has been engineered to enhance the playing style of the world’s most exciting and entertaining players. The Future Z boot was built around an adaptive FUZIONFIT+ compression band to provide optimal lock-in and support, features an upper made from an innovative new knitted material coated with a thin layer of GripControl Pro to provide superior touch and ball control and a cutting-edge new Dynamic Motion System outsole developed for advanced traction to drive the opposition craZy.

At the end of last year, the sports company has also unveiled the Neymar Jr. Future collection, which includes the Neymar Jr. jersey, shorts, training accessories and off-pitch apparel, all featuring the signature Neymar Jr. number 10 logo throughout, in bright Brazilian colors and fonts inspired by the pichacão graffiti found on the streets of São Paolo.

The RRP is R3599 available from PUMA.com, PUMA stores, Totalsports and selected retailers in South Africa from 4 February 2021.