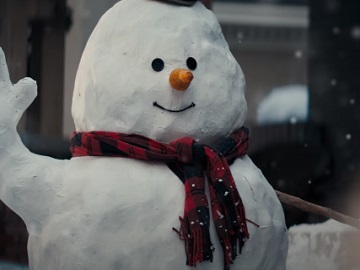 Publix, the largest employee-owned supermarket chain in the United States, has unveiled its Christmas commercial, which aims to inspire people to share the magic with a friend this holiday season.

The ad, created by 22Squared, Inc. and titled “The Attic,” tells the story of a little girl (played by Wynter Glenn) who notices a snowman in a neighbor’s attic and can’t help thinking about it. On Christmas Eve, she leaves a tray with some snowman-shaped sugar cookies for the old man at his doorstep, and a carrot for the snowman, which she calls “Mr. Snowman”. Later on, while she and her parents reunite with other family members for Christmas, her neighbor is shown sitting alone in a dimly-lit room, looking at a black-and-white photo of a young father and daughter about the same age as the little girl.

The next morning, she rushes outside, where the first snowflakes fall to the ground, and sees a snowman with a smile on its face. Her neighbor is also shown smiling from his window seeing the girl’s face all brighten up by a huge smile.

“Give someone a reason to believe” an onscreen line reads at the end of the commercial, when the voiceover urges viewers “Merry Christmas from Publix”.