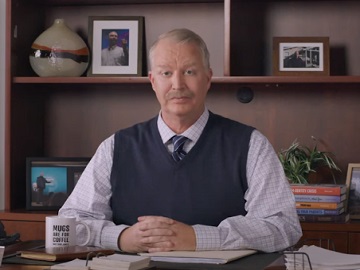 Dr. Rick is back in a new commercial for Progressive, talking about the contest which gives participants the chance to win a free cameo from Dr. Rick.

The spot features the Parenta-Life coach saying that Father’s Day can really bring out the dad in people and “when you’ve devoted your life to helping people un-become their parents, it can be painful to watch.” “That’s why this Father’s Day I’ve teamed up with Cameo to give you a chance to win one of 30 free personalized videos to help the people in your life that need Parenta-Life Coaching. To enter, head to Twitter and tell us how a person in your life is exhibiting dad-like behaviors. Whether it’s a friend who buys pants based solely on how many functional pockets they have or a coworker who keeps a bird book on them to incessantly point out American goldfinches. And it could for your actual dad, your husband, uncle, sister, even ex-roommate. Anyone who’s really showing signs of Parentamorphasis. Help me help them this Father’s Day. Learn more about the rules and how to enter at on.cameo.com/DrRick,” Dr Rick says from his office, looking at the camera.

This new campaign can be considered a continuation of the “Parentamorphosis” campaign, which was created by Arnold Worldwide in 2016 and became Progressive’s most successful effort without spokeswoman Flo.