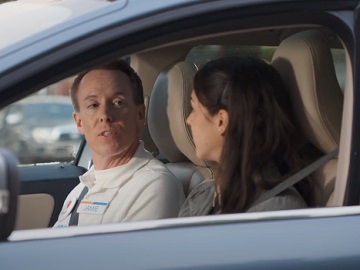 Jamie is back in a new Progressive commercial and does his best Snapshot app impression as he tries to help a young
woman up her safe driving game.

The spot opens with Jamie, played by Jim Cashman, telling the woman, named Beth, that he will be observing her
safe-driving abilities and, if she plays her cards right, she could get a “tasty discount”. Beth’s patience is
seriously tested as Jamie does all kinds of annoying things while she’s driving – from talking too much to listening heavy metal music to eating, sleeping and even snoring. He even makes her stop the car so that he could grab some pieces of wood left on the side of the road. However, Jamie’s ride ends abruptly when Beth hears a radio commercial about Progressive’s Snapshop app, which rewards you for driving safe and driving less. Learning that there’s an app for that, she leaves Jamie behind, at the first bus station.

The Snapshot app is available to Progressive customers in select states who were offered and enrolled in the mobile
version of Snapshot (not the plug-in device) when they purchased their policy. The app allows customers to use their smartphone to collect driving-related data, such as vehicle speed and time information, hard braking and mileage, and receive personalized tips on how to improve. Progressive uses the collected driving data to calculate a driver score based on which drivers can save money.

In states where Snapshot mobile is offered, new Progressive customers are eligible for a first-term participation
discount, after which they will receive a personalized rate, meaning a discount or surcharge applied to their
insurance premium based on their driving habits, at the next renewal of their policy. “For eligible customers who
enroll, most will save money at renewal based on their good driving,” the company states, informing that, in some
states, aggressive driving will generate a surcharge at renewal.

Only users of iPhones and Android smartphones are eligible for Snapshot mobile.

Cashman was enlisted to join Progressive’s spokeswoman, Flo (Stephanie Courtney), as her sidekick, in 2017. In one
of the spots he starred in, dubbed “Jamie’s Twin”, he even had a doppelganger, played by British actor Jack Turner.