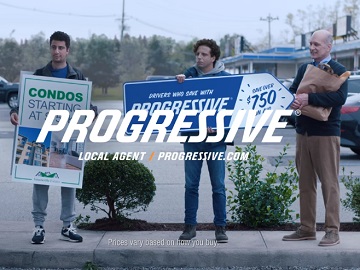 Progressive has released a new ad in its “Sign Spinner” campaign.

The spot features the Sign Spinner (played by Mike Sullivan) holding his well-known sign (which informs that drivers who save with Progressive save over $750 on average) on a sidewalk and another guy, holding a different sign, near him. At some point, the Sign Spinner’s father shows up to say hi to his son. Seeing the other young man there, he asks his son who is his friend. Finding out that his name is Erik, the old man immediately comes up with a nickname for him: “The Big E”. “People love my nicknames. It’s a whole thing,” he says, which makes the Big E answer, a little bit embarrassed, “That’s wonderful, sir”.

“Switch to Progressive and you could save hundreds. You know, like the sign says,” the voiceover says at the end of the commercial, which also sees the Sign Spinner indirectly asking his dad to leave by pointing out to him, who’s still standing there, that they are working.

An older commercial featured the Sign Spinner sitting telling his girlfriend (played by American actress of Indian origin Sunita Mani), while hanging out on the sofa, that he thinks his forearms are getting bigger because he had been spinning faster.