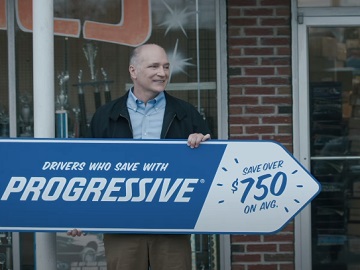 The Sign Spinner’s dad is back to the screen in a new commercial. This time he fills in and keeps his promise of “no spinning”.

The spot opens with the old man holding the sign in front of a store and making popping noises, which doesn’t impress the passersby in a good way. When the Sign Spinner (played by Mike Sullivan) shows up in a hurry and asks him if he spin it, the dad answers “You asked me not to”.

As they switch places, he encourages his son: “Go get ’em, buddy!”. Shortly after, though, he returns, telling his son he forgot where he had parked, leaving the Sign Spinner speechless. The father doesn’t stay too much, this time. He heads to the parking lot, not without adding “Make us proud, son!” to the young man.

This is not the first time the Sign Spinner’s dad appears in a commercial. In a previous one, he passes by to see his son and, seeing a young man with him, wants to know his name. He immediately comes up with a nickname for him, bragging that people love his nicknames.

In some previous commercial, Sullivan as joined on screen by American actress, dancer, and comedian Sunita Mani, who played the Sign Spinner’s girlfriend.