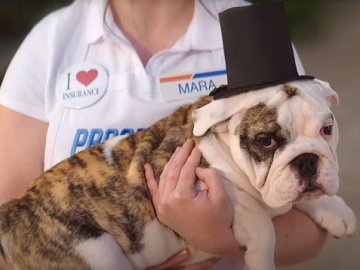 Progressive informs that its car insurance covers pet for up to $1000 in a new commercial featuring lots of pets.

“At Progressive we love your pets as much as you do, like this guy in a hat. That’s why Progressive car insurance covers your pets for up to $1000 if they’re ever in a car accident with you,” the voiceover says in the opening of the 30-second spot, which features a variety of pets, including a mini majorette, golden retriever puppies, and kittens in band outfits.

At some point, Flo shows up saying that it’s too much with all those pets, many of whom are held by her colleagues, including Mara and Alan. Jamie, clad in a band outfit, as well, asks Flo if they are doing “this” or not, referring to filming the ad. When Flo decides that it’s over, Jamie adds that someone’s got to break the news to Mittens. When the adorable kitten squeaks softly, Jamie declares that she’s a diva.

Progressive added pet coverage to all of its auto insurance policies in 2007, providing up to $500 in benefits for family pets injured or died in an accident.

Progressive pet policies are made available through Pets Best, a highly rated pet insurance company and a pioneer in providing coverage for household cats and dogs since 2005. A diverse range of plans, such as accident-only, accident and illness, and wellness plans, can be purchased at convenient prices, with the majority starting below $10 per month for younger animals.