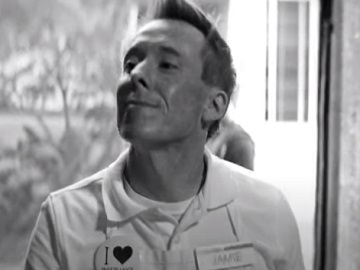 Jamie is SO Holywood he can’t even remember what day it is in the latest Progressive commercial.

The spot opens with Jamie arriving by car at Hollywood, apparently, where a diverse cast of actors can be seen walking around.

“Some of us were born for this. To protect people. To help them save. With a Home and Auto bundle from Progressive,” he is heard saying in voiceover while black and white footage shows him entering the set and acting like a famous actor. After throwing his own coat to someone who had no intention of catching it, and after sipping from a small juice box and squeezing it, he even gives a boy an unwanted autograph on his summer hat.

He then gets in front of the cameras and interrupts the filming of a commercial with Flo and another woman, believing it was primetime for him. It turns out he wasn’t supposed to be featured in that commercial and that Jamie had actually forgotten about what day it was.

Jamie is played by actor Jim Cashman, known for The Boss (2016). He joined Stephanie Courtney, who played Flo, in 2017.