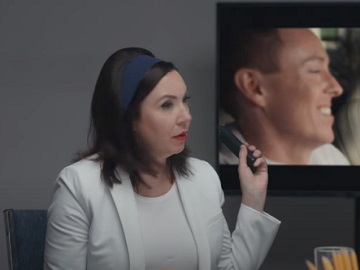 Progressive has released a hilarious new commercial featuring Flo. This time, she tries to get her focus group to focus on Snapshot, but things take an unexpected turn.

The spot begins from the latest Progressive Flocus Group ad, which saw Flo and a focus group watching a video of Jamie and a driver talking about Snapshot app, which rewards drivers for driving safe and driving less. After the video ends, Flo asks the participants what message they heard.

“Save drivers can save using Snapshot?” she asks, giving them a hint. One of the men, Kirk, asks what’s Snapshot, which makes Flo explain that it’s what the commercial was about. Rashad reveals that he tunes commercials out and this leads to a series of other similar statements. Meredith says she’s going to a silent retreat next weekend and another man reveals that his niece got kicked out of one of those, but not for talking. The reason was grand larceny. This leaves everyone speechless, which makes Flo break the silence and try to get the group focus on the Snapchat app and get back to the savings. At this point, everyone’s agreeing.

In 2017, she was joined by Jim Cashman, who plays Jamie, and in 2020 by Natalie Palamides, who plays Mara, one of her colleagues. Progressive has also enlisted Paul Mabon to play Alan, Christine Tawfik as Lucy, Brian Stepanek as Bob, Xian Mikol as Jamie’s wife, Regan Burns as Rodney, Bill Glass to portray Dr Rick, the Parenta-Life Coach, who helps new homeowners to not turn into their parents, and Terrence Terrell to portray the Motaur.