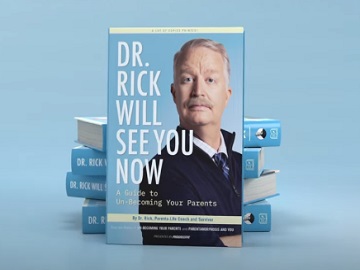 Dr. Rick is back to the screens in a new Progressive commercial.

The spot features the Parenta-Life coach during several of his therapy sessions with Parentamorphosis sufferers from across the nation, while the voiceover is promoting his book, titled “Dr Rick Will See You Now”. The pioneer of parentamorphosis has created the ultimate guide to help sufferers everywhere unbecome their parents. “It’s me in a book, but you get to talk back to the book, which is like talking to me. So it’s an interactive parental life journey that I’m super proud of” Dr. Rick says before signing one of his limited-edition books.

“From his seminars to his training programs, get it all now in one book,” the voiceover says at the end of the commercial, urging viewers to get a book today.

This new campaign can be considered a continuation of the “Parentamorphosis” campaign, which was created by Arnold Worldwide in 2016 and became Progressive’s most successful effort without spokeswoman Flo. In previous commercials, Dr. Rick helped young homeowners deal with the very real struggle of not turning into their parents using other methods. One of them consisted in asking them to answer a series of “very real and pressing questions,” like “How many pillows are too many?” “When does helping become hindering?” “Who reads books about Submarines?” and another one consisted in a group outing at a store called House World. He has also accompanied a man to a grocery store for gameday shopping and stayed close to another man while he was having a plumber fixing a problem under the kitchen sink, reminding him about the 10-foot rule.

Previous: Verizon Commercial: Have You Got Any Games on Your Phone?
Next: Alexander McQueen Holiday Gifting Collection Commercial – Feat. Spider and Snake on Skull in Dark Forest