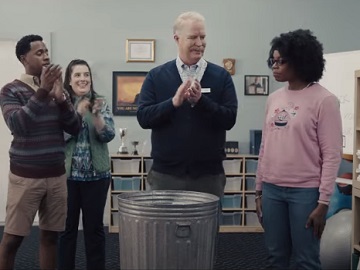 Progressive has released a new ad starring Dr. Rick on his mission to help homeowner struggling not to become their parents.

The spot features the Parenta-Life Coach implementing several methods with young homeowners who are turning into their parents. He tells them they do not need a “Live Laugh Love” home decoration sign wit in order to do those things, tries to teach them pronounce the word quinoa, and open a PDF.

This new campaign can be considered a continuation of the “Parentamorphosis” campaign, which was created by Arnold Worldwide in 2016 and became Progressive’s most successful effort without spokeswoman Flo. This campaign included several spots directed by Roman Coppola, featuring homebuyers that assume the most annoying traits of their parents. One of the commercials featured several men and women talking in a “Dad” Support Group about their transformation frustrations. Another spot featured a married couple sharing their story about how the husband, Matt, changed when they became homeowners. If, when they were dating, they used to get excited about things like concert tickets or a new snowboard, all that changed when they bought a house. “Matt started turning into his dad,” says the woman. Another ad featured a group of friends on a road trip, where they realize that one of them, named Keith, who “used to be great to road trip with,” has changed dramatically since he bought his house.