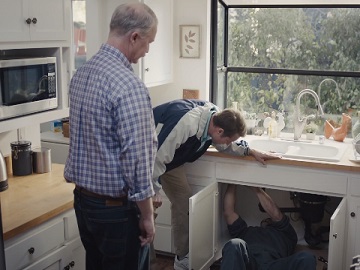 Dr. Rick is back in a new commercial, saving a young man from becoming his parents.

The spot features the Parenta-Life coach staying close to Tom while he’s having a plumber fixing a problem under the kitchen sink. Tom has several attempts to make himself useful by constantly talking to the plumber and acting like his assistant. Dr. Rick reminds him that Tom hired the plumber and the latter has his own toolbox, so he can give him some space to do his job. He also suggests Tom to try one of the rules he had taught him, namely the 10-foot rule, which makes Tom want to go to the garage and grab a tape measure.

Dr. Rick says that when we buy a new home we turn into our parents. The process of not becoming our parents is tough, but with baby steps it’s possible.

This new campaign can be considered a continuation of the “Parentamorphosis” campaign, which was created by Arnold Worldwide in 2016 and became Progressive’s most successful effort without spokeswoman Flo.