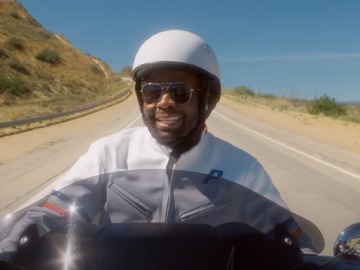 Progressive has released a new ad to promote its bundling options.

The spot features Flo in a classroom, holding a lesson to her colleagues about Progressive’s bundling. “Now, we all know Progressive offers 24/7 protection but we also bundle outdoor vehicles with home and auto to help people save more,” she says. While everyone gets bored, Alan starts daydreaming about the vehicles he would ride. Thus, he imagines himself riding a motorcycle, a boat, and even driving a trailer, which he uses to go to a cabin called “Alan’s Happy Place,” where he finds Flo, Jamie and the others already there. Asked about the reason why they all are in his daydream, Flo answers that “it’s better than that presentation”.

The end of the commercial sees Flo back in the classroom saying that, “whether it’s a fraction or a decimal, it’s still fun”.

In 2017, she was joined by Jim Cashman, who plays Jamie, and in 2020 by Natalie Palamides, who plays Mara, one of her colleagues. Alan is played by Paul Mabon, an actor who has also appeared on Season V of Russell Simmons presents Def Poetry.

Progressive has also enlisted Christine Tawfik as Lucy, Brian Stepanek as Bob, Xian Mikol as Jamie’s wife, Regan Burns as Rodney, Bill Glass to portray Dr Rick, the Parenta-Life Coach, who helps new homeowners to not turn into their parents, and Terrence Terrell to portray the Motaur.

Previous: LinkedIn Man with Plant Pot Commercial Song
Next: Extra Gum It’s All Coming Back to Me Now Advert Song