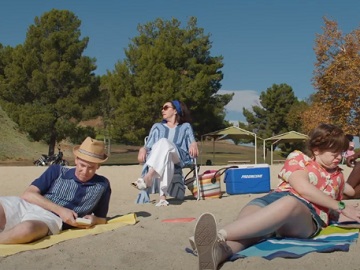 Flo, Jamie, and the rest of the team decide to take a break from work in the latest Progressive commercial, but it turns out Flo can’t turn it off – even on beach day.

The spot opens with the Progressive crew ready to enjoy a sunny day at the beach. Jamie comes up with the idea of “no insurance talk on beach day” and everyone agrees, but when two people nearby start talking about insurance, Flo has some serious trouble restraining from talking. The Progressive reps hear a man complaining that insuring his RV is a hassle and a woman complaining that her insurance bills for her boat are through the roof. When the man says he wishes he could group his insurance stuff (meaning his house, car, and RV), Flo starts coughing and says the word “bundle” but they don’t hear her and come up with the expression “an insurance cluster”. Hearing the man say he doubts that exists, Flo can’t help shouting that “it’s a bundle and it saves you money”. She’s also standing up at the same time and runs toward him, leaving her colleagues behind. “Super fun beach day, everybody,” Mara says, while flicking through a magazine.

Jamie, played by Jim Cashman, was enlisted to join her in 2017. In one of the spots he starred in, dubbed “Jamie’s Twin”, he even had a doppelganger, played by British actor Jack Turner.

Last year, the insurance company introduced Mara (Natalie Palamides) as one of Flo and Jamie’s colleagues, who makes all her male suitors back away.