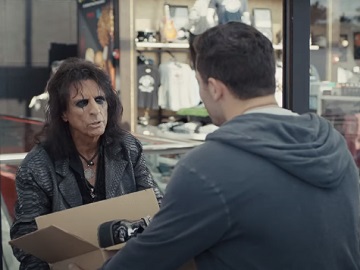 Progressive continues the third season of its “At Home with Baker Mayfield” campaign with a new installment. This time, a package delivery mix-up leads to Cleveland Browns quarterback spending some time with a Hall-of-Famer next door, Alice Cooper.

The spot follows Mayfield as he heads from his “house” (the 2-million-square-foot FirstEnergy Stadium) to his neighbor’s “house” carrying a package. When Alice Cooper opens the door, he explains that he opened the package by mistake and believes it belongs to him. He then gives Cooper a black leather boot adorned with chains to take a look at it. “You sure they’re not yours?” the rocker asks him, which makes Mayfield answer he’s pretty sure they’re not his. “Oh, online shopping, it’s my curse,” Cooper says trying to joke before he asks his neighbor if he has a wheelbarrow because he would need one to borrow.

The commercial ends with the onscreen line “It’s your house. Protect it with Progressive”.

Progressive’s NFL Campaign, from agency Arnold Worldwide and O Positive director Kenny Herzog, sees Mayfield and his wife, Emily, sharing the screen for the third year, to promote the company’s home insurance. This season, the Cleveland Browns star dishes the hot gossip with neighbors and rocks a fanny pack for a yard sale, among others.