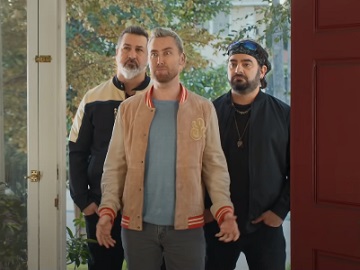 Progressive has enlisted 3/5th of NSYNC for “The Ad Where Nothing Happens”.

The spot features Flo and one of her colleagues telling a customer that, with her home & auto bundle, she will save money and get round-the-clock protection. The woman says it sounds great and a moment of awkward silence ensues. At some point, she even asks if something wacky was supposed to happen and Flo explains that they thought people could use a break given the fact that we’ve all been through a lot this year. The new customer agrees that this makes sense, but it soon turns out that something was actually “in store” for her. Three out of the five members of the boy band NSYNC show up at her front door, ready for a performance. Flo tells them it’s not a good time, which makes the singers remind the Progressive representatives that they have them booked all day. “Read the room, guys!” Flo’s colleague asks them.

Created by agency Arnold Worldwide, Flo is played by actress/comedian Stephanie Courtney, who took over this role for TV in 2008. Courtney also portrays other members of Flo’s family, including her sister, Janice, her brother, Todd, as well as her parents and grandfather. In 2017, she was joined by Jim Cashman, who plays Jamie, and in 2020 by Natalie Palamides, who plays Mara, one of her colleagues. Progressive has also enlisted Paul Mabon to play Alan, Christine Tawfik as Lucy, Brian Stepanek as Bob, Xian Mikol as Jamie’s wife, Regan Burns as Rodney, Bill Glass to portray Dr Rick, the Parenta-Life Coach, who helps new homeowners to not turn into their parents, and Terrence Terrell to portray the Motaur.