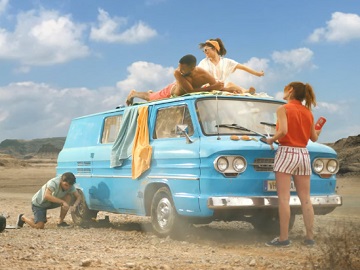 Pringles has launched a new multinational ad campaign created in partnership with Grey London, which encourages people to “Do summer your way”.

One of the spots features a young couple lounging in the sun on towels placed on a blue thing, which it turns out to be, when their Pringles can rolls down, a vintage van used for a road trip with friends. While another girl is cooking burgers on a side of the vehicle, a fourth friend is working on replacing the flat tire. On top of all that, it also turns out that they are in the middle of nowhere. This doesn’t stop them, though, to enjoy the bright sunny day and make the most of every moment spent together.

Another ad, set against a sandy background, which makes viewers think about the seaside, features three individuals eating together Pringles. There is a twist, as well – they are all construction workers and just had a lunch break on site, near a pile of sand and some puddles, among other workers and implements.