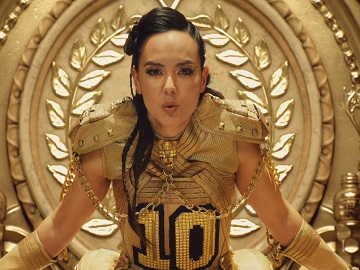 Powerade celebrates the power in numbers and all athletes in a new commercial.

The spot, part of the brand’s latest campaign from Haymaker and Radical Media director Dave Meyers, titled “POWER in Numbers,” features a variety of silly situations that involve athlete jersey numbers between 0 and 99. A power forward wearing number 1, for instance, turns into a chef and cooks while driving down court, a wide receiver wearing number 87/barber sets up a shop in the end-zone, and a softball batter freezes in ice at the plate.

The commercial debuted on March 14 on CBS, TNT and other channels, and will also air, along with other ads, during coverage of the NCAA men’s and women’s basketball tournaments, Powerade being the official sports-drink sponsor of March Madness. The campaign also includes in-game billboards, mobile video and banners on YouTube and Instagram.

For a limited time, athletes can pick up special Powerade and Powerade Zero Sugar bottles emblazoned with their own number. Bottles are available in 28 oz. bottles at retailers nationwide.