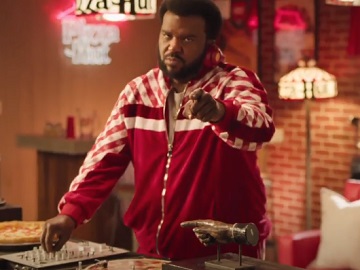 Pizza Hut has released a new ad for its Original Stuffed Crust.

The spot, set to the tune of Trap Beckham’s “Back It Up” features Craig Robinson saying that, every time he eats Stuffed Crust from Pizza Hut Original, he plays this song and invites viewers to watch what happens when he plays it backwards. The song says that three toppings are just $11.99 and Robinson adds, at the end of the commercial, the chain’s tagline, “No One OutPizzas the Hut”.

Pizza Hut introduced the $11.99 Stuffed Crust Pizza Deal at the beginning of this year, in January. It it available for a limited time at participating Pizza Hut locations nationwide for contactless delivery, carryout and curbside pickup. The chain has also added to its menu, exclusively in select Los Angeles and Dallas locations, Nothing But Stuffed Crust, which is basically just the crust.

This is not the first ad starring Robinson. The comedian has also promoted the chain’s $10 Tastemaker in a commercial in which he plays a sit down version of Pac-Man in a Pizza Hut restaurant and says that he’s been playing this game since ’82.

The ads are part of Pizza Hut’s new campaign, created with agencies GSD&M and Tool of North America.