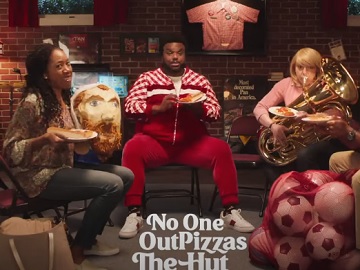 The commercial ends with Robinson and his fellows saying simultaneously the chain’s tagline, “No One OutPizzas The Hut”.

This is not the first ad starring Robinson. He has been featured in other ads, created by agencies GSD&M and Tool of North America, promoting the chain’s Original Stuffed Crust, the all-new Edge, with thin, crispy crust and toppings to the edge, and the $10 Tastemaker. His portfolio also includes appearances in commercials for insurance company The General, Walmart, Dodge, Hulu, Dietz & Watson, and more.