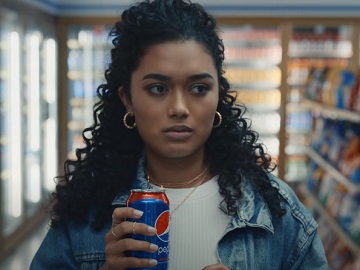 Pepsi has released a new ad for its Wild Cherry flavor.

The spot features a young curly haired woman in a grocery store who, after grabbing a can of Pepsi Wild Cherry, starts singing “I’ll cry cause I love you” as if she was performing on a big stage. She soon realizes though that she’s actually in a store and is a little bit embarrassed, but the shop assistant doesn’t seem too bothered by her show – on the contrary, he’s quite happy about it and impressed by her voice.

The beverage brand has unveiled its new campaign for Pepsi Wild Cherry and Pepsi Vanilla last year, in March. The TV commercials feature two iconic songs – LMFAO’s “Sexy and I Know It” and The Weeknd’s “Blinding Lights”.