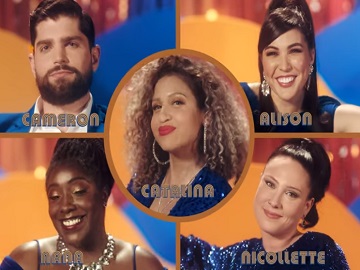 Pepsi has come up with a new initiative: to help 10 real singles find their perfect match.

The beverage brand, which has recently launched its Mango flavor as Pepsi’s perfect match, has released a new commercial, introducing 10 single people who can be asked out on a date. Cameron, Nana, Nicolette, Alison, Catalina, Kate, Kyle, Lorena, Devon, and Gianna star in the ad, all clad in blue outfits, and some of them get to reveal some of their passions. Nana, for instance, says she likes to watch cheetah videos and Catalina says she can surf and do a handstand at the same time.

“They can be the star of your life. All you have to do is call the number below (1-833-MANGO-11) and you just might go on a real virtual date,” the voiceover says at the end of the commercial, which also sees Alison asking the filming crew if they (viewers) know if this is real.

The Mango-flavored Pepsi, which marks the brand’s first permanent variety, was promoted in a previous ad, scored by Jason Derulo’s hit single “Take You Dancing”.

The refreshing drink, which marks the first launch of regular and zero sugar options at the same time, is available for purchase at stores nationwide, in 12-packs of 12-ounce cans and 20-ounce bottles.